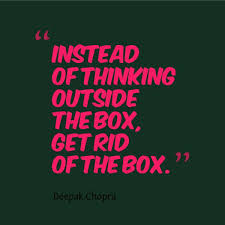 CREATIVITY: I love this one, as it allows for the exploration of the unknown and produces surprises…some not expected. I like the use of Acronyms as they are a special treat to the lovers of the English language.

Two of my favorites, coined by me, are: POA (Plan-of-Action); BOBB (Bring Our Business Back); both are “positive forms of creativity.” I like the “surprise” affect, too; doing something not normally done. Especially when the outcome is POSITIVE. Creativity also challenges ones abilities, allowing one to “think-outside-the-box.”

A few “not so popular,” yet well-known Acronyms are…IRS, FBI, and SOB.   My view is the FBI has long lost its intended purpose, and has become a political tool that is abused by those in the “highest of offices.” And, the FBI certainly has its purpose, and for the most part is necessary, but also an arm of the government that is too, often, abused for political purposes. And then, there’s my favorite…SOB. As a very young chap, say ages 10 and 11… I thought that SOB was a very powerful word, making the “user” a BIG-SHOT… and used it (or miss-used) it often… that is, until, I got the crap beat out of me for using it one time …too often. I still use it on occasion, but only to describe myself… as a “former user.” I used to, for many years, be a “paid SOB,” and then later was a SOB… and “did it” for FREE.

We, as leaders, should strive to exercise our creativity skills. Romans 12:2 – “Do not be conformed to this world, but be transformed by the renewal of your mind, that by testing you may discern what is the will of God, what is good and acceptable and perfect.”

All of us is endowed with creative ability, as a direct “gift from God.” Considering that we are image-bearers of the God who built the universe out of dust; the potential for innovation is written into our DNA, and it’s ours to use… or abuse.

All of us are not creative in the same manner. Some of us are Idea men, who are gifted with the ability to pull new ideas out of nowhere …giving them substance and value. Then others of us are developers, who add value to those ideas by turning them into something useful and of value. And next… there are the creative visionaries who take those ideas and make them happen, and finally, the evaluators who visualize a process of improving things that don’t work so well.

So, there we have it…God “the Master Creator,” being the source of all creativity, and by creating us in His own Image, He gave each of us “certain gifts of CREATIVITY.” And because He also gave us “free-will,” we also have the right to use it for His Glory, or to use it for our own selfish means. It’s our CHOICE to be “God-like,” or worldly.

← “…Too often, being over confident gives a false impression of pending success…”
“…I have gotten away with USING others, too, because I use them for GOOD, and not evil…” →