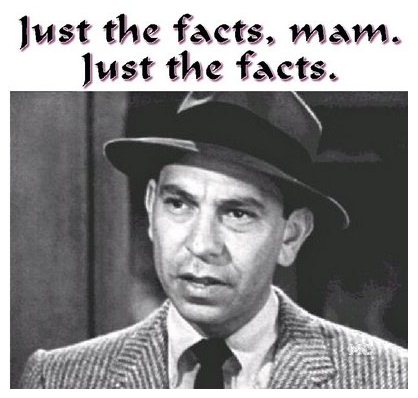 Let’s get the facts straight. This would seem to be a very important concern…dealing with the facts…the correct facts…the factual facts. It is especially important during this Election Cycle… when the “truthful-facts” are important…such so, that the voters can separate TRUTH from FICTION.

The sense of TRUTH… is sadly missing… both from the candidates and the MEDIA.

Remember the early TV series – Dragnet, where Sgt. Joe Friday always said… “All I want is the facts, Ma’am, just the facts.” The use of incorrect information…incorrect-facts …can… all too often… have the same effect as a lie. It could be very damaging. We all remember the children’s game, where a word, or sentence, starts at one end of a line, with one set of facts, and by the time it ends up at the other end…something is entirely different.

I know a another fellow who didn’t find out his wife was ten years older than he was until she applied for Social Security…what a shock that was. Correct FACTS are important. Where would I be, right now, without Spell-check? Think about the effect, during war, of in-accurate maps; or in manned space… where the use of incorrect calculations could send a space craft into oblivion; or in Government…the in-accuracy of government spending, SSI calculations, IRS calculations, etc.

One Accurate Fact we can always rely on …is the Bible: John 10:27 – My sheep hear My voice, and I know them, and they follow Me.

God does not change the facts, miss-represent the facts… nor does He miss-inform us.

← “…About a year ago….I’ve started cutting my own hair. I just set the trimmer on #3… and away it goes…”
“…We don’t have to be preachers…we can be ourselves, because people will see God in us… by the way we live, the way we love… and the way we treat others…” →