“…Don’t mix business with pleasure, particularly if it involves, or includes… your employer. It will all be down-hill…” 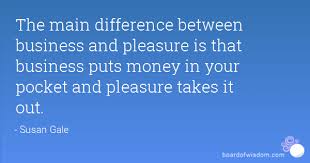 Business before Pleasure:   PLEASURE:  This was some advice given to me by an early mentor when he discovered that I had gone to work for a particular person and company. Right in “presence of my employer,” He strongly, but smiling, advised… Don’t get personal him…. Never socialize with him (the boss)… Keep it ALL business. Believe me….it was darn good Advice. …..Don’t mix business with pleasure.

Over the years, I followed his advice…all to my best advantage. I’ve seen it happen over and over, again and again…with this particular employer and CEO. Some of the people he employed became “his buddies,” only to be fired. Sometimes… he hired his friends, or a friend of a friend, or a son of a friend…only to be abused, and eventually “fired.”

Was this typical of this particular CEO…yes, it was. But, I consider it “typical” with most CEO’s that I’ve been associated, or have been close enough to, to see the same scenario unfold…over and over…again, and again. This particular CEO ruined the marriage of some number of his employees…and then, later…his own. This reminds one of King David…

So… the ADVICE I got from my mentor from an earlier life….was good advice. Don’t mix business with pleasure, particularly if it involves, or includes… your employer. It will all be down-hill. Stay at a “safe distance” and things will go a lot better.

Take God to Work or Leave Him at Home? Psalm 127:1 – “Unless the LORD builds the house, its builders labor in vain. Unless the LORD watches over the city, the watchmen stand guard in vain. In vain you rise early and stay up late, toiling for food to eat…” Of course we see ungodly people who build fine houses and run great cities, but time brings punishment if that becomes the way of the land.

I read, recently, where someone suggested that God had abandoned “the world.” O’my…was he ever WRONG. It is us…the world, who have “abandoned God.”   It is no different today…than it was in the time of Samuel…and King Saul.

1 Samuel 8:6-9 – But when they said, “Give us a king to lead us,” this displeased Samuel; so he prayed to the Lord. And the Lord told him: “Listen to all that the people are saying to you; it is not you they have rejected, but they have rejected me as their king. As they have done from the day I brought them up out of Egypt until this day, forsaking me and serving other gods, so they are doing to you. Now listen to them; but warn them solemnly and let them know what the king who will reign over them will claim as his rights.”

← “…The price for LEADERSHIP is, too often ….too HIGH…”
“…It seems like, in real life… we find ourselves in just such a ‘predicament,’ from time-to-time. Having to choose the ‘lesser of two evils’…” →