“…Early on in my life, I was taught to save my money and pay-cash…” 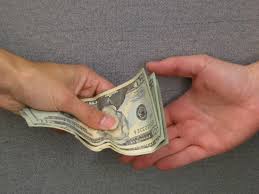 No one can serve two masters…

There was a time that at the very mention of the word “Slavery” that I had visual impressions that called to mind a horrible event in 18th century America. But no longer does that happen and I’ll tell you why. That’s because, believe it or not, slavery is still very much alive and well, right here in 21st century America today, but in a much more insidious way.   What I want to say, however, is that, in America today, we are in fact completely and totally enslaved by credit and debt; and it has made most of us slaves to the Banks and other credit institutions. Even King Solomon, the wisest man that ever lived, had this to say about debt in Proverbs 21:7: “The rich rule over the poor, and the borrower is slave to the lender.”

In a previous article, as a Guest Author on BrOOKS-of-WISDOM, you’ve heard me mention the wise words of my late father; the man with the 6th grade education, and a PhD in common sense. Well, here is another one of his famous sayings: “Don’t work for the Bank.” I’m guessing the first time I heard him utter that contemptible phrase I was perhaps 17 or 18 years old, and a young Marine at that; who had very little fear of anything, much less the fear of one day working for “the Bank” as opposed to Uncle Sam. I remember how that statement amused me as I contemplated the purchase of a new motorcycle by virtue of a loan from the local Credit Union.   It was many years before I truly understood the wisdom of what my father was attempting to impart on me, and many more years to unravel and repair the financial mess that I created for myself.   In Matthew chapter 6:24 -we are told the following: “No one can serve two masters. Either you will hate the one and love the other, or you will be devoted to the one and despise the other. You cannot serve both God and money.”

I distinctly remember the months and years preceding the financial meltdown we experienced in this country starting around 2007. The sight of the myriad of “high end” homes with “high dollar” vehicles parked in the driveways just never ceased to amaze me, and I often wondered just how long that charade was going to last before the bottom simply dropped out.   Once the credit dried up, so did the sales

In the end I think that entire financial mess we all lived through shed a very profound light on the pitfalls of credit and how lives, marriages and entire retirements can be reduced to utter ruination as a result of credit mismanagement, and debt.

But the burning question that still lingers in my mind is “have we learned anything?” More importantly, what are we doing to teach our children about saving money for the future, having a plan for life, and using credit wisely? Once again, for clarification, I point you to the following passage in the book of Matthew 6:19-21: “Do not store up for yourselves treasures on earth, where moth and rust destroy, and where thieves break in and steal. But store up for yourselves treasures in heaven, where moth and rust do not destroy, and where thieves do not break in and steal. For where your treasure is, there your heart will be also.”

There is so much more that can be said about credit and debt. For the most part it is difficult, at best, to live in the world we live in today without incurring some sort of debt. Generally speaking, knowing the difference between what we need and what we want is a good start toward beating credit dependency. Financial independence can be achieved if we start out with a plan for saving and giving, pray about it, and accept the fact that everything belongs to the Lord; we are just His stewards. Remember the words of Paul in 2 Corinthians 9:7:  “Each man should give what he has decided in his heart to give, not reluctantly or under compulsion, for God loves a cheerful giver.”   …Tom Slavonik…12/31/14

Note: This article is especially appropriate as we move into a New Year – 2015, and ponder the idea of “New Year’s Resolutions.” Incurring DEBT is “always” a very serious matter, and my life-long position on debt is “not to have any.”  Early on in my life, I was taught to save my money and “pay-cash.” My friend, Tom Slavonik, is a Vietnam  Era and Cold War Veteran, serving in the Marine Corps. He has been in the HVAC industry for many years, but his passion is Aviation. He owns his own plane, and is a Certified Flight Instructor, living in “The Apple of the Lord’s Eye”…..South Carolina. I am proud to call Tom my friend. …Blessings…cjlb…12//31/14

2 Responses to “…Early on in my life, I was taught to save my money and pay-cash…”