“…For some… their entire life consists of ‘secondary’ choices…” 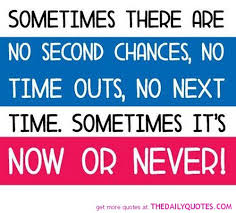 My Secondary is my Primary: How so? Recently, I dropped my eye-glasses and broke them. While having them repaired, I used my “Secondary glasses” as my temporary backup. The repair job only lasted about 6 hours, and I found that my Secondary glasses had now become my Primary. Has this happened to you?

For some, it has happened even in their career. As in, having to take the 2nd choice job, instead of the one you really wanted. Or the 2nd choice transfer so that your child could go to a certain school. Or maybe, even, you married the only girl who would have you, as your 1st choice married your best friend.  For some… their entire life consists of “secondary” choices.

I know a fellow who, as a young boy, always wanted to be a priest. But, because of a foolish mistake, his plans were derailed and he married someone out of responsibility and spent his entire life in a “loveless marriage,” and produced four children along the way. He became a very successful educator, but NEVER the priest of his dreams…. Instead a choice way down the line of preferences.

Is there a 2nd choice in choosing God? For some…Yes, there is, in fact, there are some people who change gods like automobiles. What possible reason there would be to worship one god, and then another… will have to be another topic for another day; but the fact is; there is only one True God, and failing to choose Him will mean everlasting damnation. There…I said it.

We cannot afford to have a Secondary god. Hebrews 12:28 – Therefore let us be grateful for receiving a kingdom that cannot be shaken, and thus let us offer to God acceptable worship, with reverence and awe. Exodus 20:3 – “You shall have no other gods before me.”

← “…There are many life-style traits available that could aide us in seeking, and maintaining, good mental and physical health…”
“…Be near me, Lord Jesus, I ask Thee to stay Close by me forever, and love me, I pray….” →