“…How are things in your life? Do you feel abandoned, disillusioned, or just “going down a dead-end street..?” 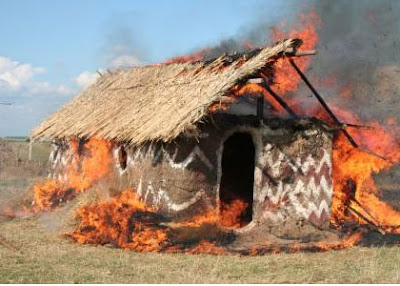 GRACE… there’s the story of a shipwreck survivor who was washed up on an uninhabited island. He prayed daily for God to rescue him. He finally built a small hut out of the driftwood, and used it for protection from the elements and for safety during the night.

One evening, after being there for several months… he came home to find his hut on fire…with smoke rolling up to the sky. The poor guy was just stunned with grief and then, a good case of anger set in. So…he cried out… ‘God, how could you do this to me; what have I done to deserve all of this?

The next day, he awakened to the sound of a ship! After being rescued…he asked…’How did you know I was here?’ The Captain said… ‘We saw your smoke signal.’

The Moral of This Story… It’s easy to get discouraged when things just don’t seem to be going your way…just bad stuff. But don’t lose heart, because God is at work in your life. Remember… the next time “your hut seems to be burning to the ground” … may be a smoke signal that summons the Grace of God.

While I consider myself to be a “junior student” of the Bible, and early on, I determined that the “story of Joseph” was my “most favored.” Remember that Joseph’s brothers had sold him to a band of thieves, who resold him as a slave and things really took a “nose-dive” in Joseph’s life.

Through this experience, Joseph learned to see his enemies, who had evil intentions, as instruments in the hand of God. Not only did Egypt and other nations benefit from Joseph’s life, but his own family did as well. When Joseph’s brothers traveled to Egypt to find food during the famine, they repented of the evil they had done to Joseph, and their family was reunited. Joseph explained a key to forgiveness when he told his brothers, “Ye thought evil against me; but God meant it unto good, to bring to pass, as it is this day, to save much people alive” (Genesis 50:20).

How are things in your life? Do you feel abandoned, disillusioned, or just “going down a dead-end street? God loves to turn crucifixions into resurrections.  The things you wish were most removed from your life are often the very things that God is using to shape you and make you into the believer of character He wants you to be.  He wants to use that problem for good in your life. There’s something more important than your pain.  It’s what you’re learning from that pain. God is in control.

← “…It should make one pause to question….who is the Boss..?”
“…Leadership roles are not Hollywood roles, that you can “step-in and step-out” of, rather… they are real life, real people, real consequences, real rewards… or real punishments…” →

2 Responses to “…How are things in your life? Do you feel abandoned, disillusioned, or just “going down a dead-end street..?”