“…I’d like to cut him down to his size…” “This rhetoric is not confined to the neighborhood jerks; but true in the Corporate Community, as well, and also; schools; government; and even the Church hierarchy…” 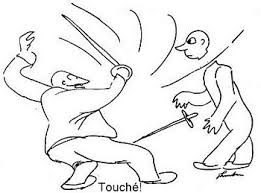 I’d like to cut him down a notch or two… Meaning one wants to beat the heck out of someone else.  Not so much…literally, but figurative speaking…for sure. The guy is just too big for his britches…I’d like to cut him down to his size.  The FACT is; this rhetoric is not confined to the neighborhood jerks; but true in the Corporate Community, as well, and also; schools; government; and even the Church hierarchy.  Remember; Caesar’s “Et tu, Brute.”

Mankind has always tried to get the best of one-another; seemingly it’s a natural instinct.  Ego and jealousy play a part, too often… a big part.   If the jealousy and ego factors are a big enough issue… then the BAD-GUY’S can “gang-up-against” the GOOD-GUY, and make up all sorts of lies… which… just the smell of which, will spell DOOM for the good guy. It’s called “getting even.” If there are legitimate complaints, which are going “unanswered,”… then let it be “God’s problem.

Romans 12:19-20 – If possible, so far as it depends on you, be at peace with all men. Never take your own revenge, beloved, but leave room for the wrath of God, for it is written, “VENGEANCE IS MINE, I WILL REPAY,” says the Lord. “BUT IF YOUR ENEMY IS HUNGRY, FEED HIM, AND IF HE IS THIRSTY, GIVE HIM A DRINK; FOR IN SO DOING YOU WILL HEAP BURNING COALS ON HIS HEAD.”

CORPORATE PRUNING is a more acceptable way of cutting one down to size. Corporate is the Art of PRUNING away dying flowers, limbs, or fruit; so that the plant can grow new limbs, bigger flowers, and an over-all stronger tree.  This is accomplished by transferring key personnel, re-training, promoting, and sometimes….firing the non-performers.  Corporate Pruning is as much a corporate dynamic as IT, HR, or R&D.

God practiced Corporate Pruning when he demoted Moses.  Even Jesus was SACRIFICED so that we might have life everlasting.  John 3:16 For God so loved the world, that He gave His only begotten Son, that whoever believes in Him shall not perish, but have everlasting life.

If God is willing to sacrifice His Own Son… surely we (you and me) are not going to be an exception. It’s not that God “gets even,” with us…. Rather… it is “us” (you and me) who shoot ourselves in the foot. When we “reject” Jesus, as the Son of God, the Savior of all of mankind… then we are REJECTING God, the Father… and, therefore, we are “rejecting Heaven.” We are claiming title to the “evil one,” rather than God. It is God’s will that we accept His “open arms,” If we (you and me) “choose evil over good,” then there will be a “permanent price” to pay for our failing faith.

Hebrews 10:38-39 – BUT MY RIGHTEOUS ONE SHALL LIVE BY FAITH; AND IF HE SHRINKS BACK, MY SOUL HAS NO PLEASURE IN HIM.  But we are not of those who shrink back to destruction, but of those who have faith to the preserving of the soul.

← “… This goes beyond just APPEARANCE; as actually, it’s a case of basic integrity…”
“…What kind of “first impression” are we (that would be you and me) making on those who “follow us…?” →