“…If we cannot CONTROL the SMART guy(s), then they’ll end up controlling us…” 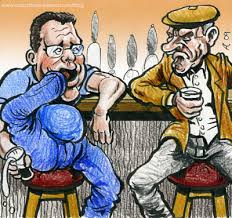 Hiring smart people doesn’t make you smart, or your company smart.  I am a firm believer in hiring smart people for required positions.  One MUST BE CAREFUL in their search for smart people.  If you are not “also smart,” then you’re already in trouble.  A dummy who hires a smart person… doesn’t make the dummy smart.  I’m talking in the general sense that we’re relatively smart people who want to surround ourselves with other smart people, which sounds good on the surface.  I am talking about hiring “smart people” to handle specific issues that we’re not well versed in.  On a collective basis, hiring smart people is a great idea, but if you’re not as smart as they are…collectively…then they are going to “out-smart” you, and you will soon be out of a job, and if you are the owner, then you might be running your company into the ground.  Every “smart” guy has his own weaknesses; and the employer or owner, must not have the same weakness.  Being an expert in a certain field doesn’t make one smart in all other fields. In all other fields, he’s a dummy.  Using myself as an example:  I MUST be smart enough to manage all the smart people that I’ve hired; I must KNOW how to harness their smartness to my advantage.  If we cannot CONTROL the SMART guy(s), then they’ll end up controlling us, our circumstances, and ultimately our future.  So, in a very unique way, we MUST be smarter than the SMARTEST guy we hire.  I once hired a smart person (in a specific area), who, as it turned out, was an EVIL (a word I use to describe many weaknesses) person, as well.  I saw the signs, but I allowed his smartness in the specifics, outweigh his (too many) weaknesses in general.  He cost me no less than $500K.  I made a BIG mistake.  But I only made that mistake ONE time.  Colossians 2:8 – See to it that no one takes you captive by philosophy and empty deceit, according to human tradition, according to the elemental spirits of the world, and not according to Christ. ….Blessings…cjlb…3/28/14

← “…many of my Brothers in Christ, are literally consumed, or if you will….are addicted…”
“…Here’s an example of my point… something that took place in my mid-teens, about 1954….” →