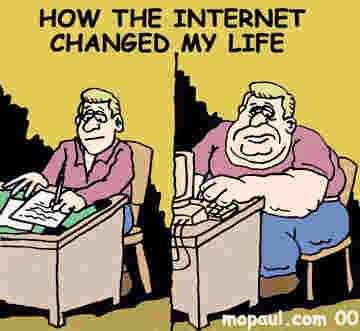 The WRATH of the Internet: The internet has given us an opportunity to introduce just about anything one would possibly want exposure to. John Q. Public is the listener, the watcher, and the one doing the demanding.

There are no criteria, no credentials, no certifications, very little policing, no requirements, no educational demands, no intelligence…and no morals required…. For one to post something on the internet… The internet is available to anyone, everyone, and someone… anywhere, any place… and any time.

Someone with absolutely no viable subject… responsible message, or product… can… in an instant, become viral. It seems that if the message is the worst imaginable, lacking in content, morals, and degrading… to every human aspect… well then, the more it is acceptable. God have mercy on us.

As an example… out of over one-billion websites on the internet… it is estimated that about 26%, or 260 million… of them are pornographic.  It is estimated that 5 billion work hours are lost to cyber-porn in America each year; with 70 percent of porn-site traffic… occurring between the hours of 9 a.m. and 5 pm….Monday through Friday.

Then… those who have a bonafide, creditable message… one that is assembled with great care, immense love, certifiable criteria…and countless hours or days of preparation…. Which… seemingly, falls on deaf ears. One may wonder why. What are we doing to our children… not to mention… ourselves?

Jesus had the greatest message ever brought to mankind… and after 2000 plus years, that message is still struggling through the maze of thoughtlessness and carelessness… all generated by human kind… at the direction of satan himself.   He uses the same masterful evil he had when he attempted to tempt Jesus Christ…and when he successfully tempted Adam and Eve.

So why all the fuss? It would be because we humans lack patience, commitment, passion, endurance, and sustainable love… for our neighbor, mankind… even for ourselves…and God. It’s no different than electing people into public service whose only intent is to line their own pockets… and we continue “re-elect” them, incidental to their corruption.

If we (that would be you…and me) see something on the internet, or anywhere else… and we patronize that issue; then we are condoning it… rather… it be for good… or for evil. The evil elements of the internet are there… because we, at our free-choice….condone… and allow it.

Romans 1:18:22 – For the wrath of God is revealed from heaven against all ungodliness and unrighteousness of men, who hold the truth in unrighteousness; Because that which may be known of God is manifest in them; for God hath shewed [it] unto them. For the invisible things of him from the creation of the world are clearly seen, being understood by the things that are made, [even] his eternal power and Godhead; so that they are without excuse:  Because that, when they knew God, they glorified [him] not as God, neither were thankful; but became vain in their imaginations, and their foolish heart was darkened. Professing themselves to be wise, they became fools.