“…Jackie Kennedy changed the world of fashion, in the early 60’s; purely by what she wore on any given day…” 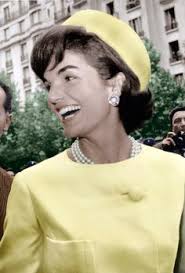 The Challenge is: to see how MUCH we can say, without saying anything…..OUT-LOUD. Can we get our point across without verbalizing it? Can we communicate without ever opening our mouth? Can we influence others (good or bad) without verbalization? How much power is there in “keeping your mouth shut?” Just what do you think you can accomplish with silence?

I believe the sky is the limit. Take Helen Keller for an example. My Gosh… look at the influence she had on society, and the nation, if not the world. She found multiple forms of communication. To some extent, one could say that Martin Luther “changed the world of religion,” without ever having “said a word.” Simply by nailing his 95 Theses on the door of All Saints’ Church in Wittenberg, on 31 October 1517, Luther brought about the Protestant Reformation.

Or, if you were to have a child serving overseas, and a Uniformed Officer shows up at your front door….an impression beyond description… words needn’t be exchanged. Jackie Kennedy changed the world of fashion, in the early 60’s; purely by what she wore on any given day….never having to utter a word. People like Mother Theresa and Pope John-Paul had tremendous influence of “all peoples,” just by appearing somewhere, or holding, or simply kissing a needy person or child. Watching the Honor Guard at the Tomb of the Unknown Soldier has had immeasurable influence on the lives of many…. For decades…without a single word being uttered. Ditto the guards at Buckingham Palace.

Finally, my point…. It’s not, so much, what we say…. But what we do; how we act; who we associate with; our conduct; our presentation; the way we dress; the way we treat others; the manner in which we walk; the respect shown others, both young and old. The impact that we have on our children… merely by glancing at them, in a certain way…. Sends un-mistakenable information to them. Same with our teachers… not only a glance of disapproval, but a smile of approval…. Often has great impact.

We form impressions that last a life-time… on such things as “a smile,” or a wink of acknowledgement. Suppose “if” Ronald Reagan or, John F. Kennedy… had walked into a room, and passed right by you…. And WINKED. Think of that….. “lasting impact.”

Think of the impact related in Mark 5:27-29 ….of the woman who; ”When she had heard of Jesus, came in the press behind, and touched his garment. For she said, If I may touch but his clothes, I shall be whole.   And straightway the fountain of her blood was dried up; and she felt in her body that she was healed of that plague.”

Think of the impact when Jesus finally breathed His last breath…As was told to us in Matthew 27:51 – ”And behold, the veil of the temple was torn in two from top to bottom; and the earth shook and the rocks were split.” ….where no word had to be spoken. In Malachi 2:2, we are told: If you do not listen, and if you do not resolve to honor my name,” says the Lord Almighty, “I will send a curse on you, and I will curse your blessings. Yes, I have already cursed them, because you have not resolved to honor me. And, in Philippians 4:9, it says: Whatever you have learned or received or heard from me, or seen in me—put it into practice. And the God of peace will be with you.

So, remember this: people are watching, and children are listening, but the better question is: …….are we? ….Blessings…cjlb…4/10/15.