“…Let’s rule out all the NEGATIVE things that can happen to put someone on the ‘front-page,’ and deal with the POSITIVE side of things…” 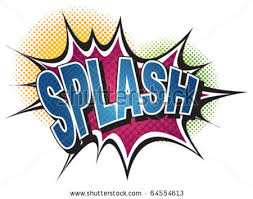 S-P-L-A-S-H…..Splash? So… what’s the big event on your calendar? What are you going to do to make your “big-splash?” What’s going to put you on top? Let’s rule out all the NEGATIVE things that can happen to put someone on the “front-page,” and deal with the POSITIVE side of things. I’m not saying that “whatever” it is …is easy;

NO…as a matter of FACT, let’s assume that you’re undertaking the “very most complicated, most expensive, most consuming” project that you’ve EVER been involved. Maybe, even, something that you’ve NEVER ENOUNTERED before. Something, for an example, like when David encountered Goliath. Or, maybe this… when God asked Jonah to Nineveh….you remember the story?

So let’s move on to Moses…when he encountered the “burning bush,” and God said in Exodus 3:9 -13 – And now the cry of the Israelites has reached me, and I have seen the way the Egyptians are oppressing them. So now, go. I am sending you to Pharaoh to bring my people the Israelites out of Egypt.” But Moses said to God, “Who am I that I should go to Pharaoh and bring the Israelites out of Egypt?” And God said, “I will be with you. And this will be the sign to you that it is I who have sent you: When you have brought the people out of Egypt, you will worship God on this mountain.”

My Point here, is this:  We all are “meant for great things.”  As told to us in Jeremiah 29:11 – “For I know the plans I have for you,” declares the Lord, “plans to prosper you and not to harm you, plans to give you hope and a future.”

So… it doesn’t make “any difference” how complicated the “plan” is for us; because God is in CONTROL. He knows exactly what it’s going to take for you (and me) to complete His mission for us. He is in CONTROL over everything…. Yes…our family, our career, our social life, and our happiness. He’s told us that He has plans for us that will give us “hope and a future” and that He will be “with us.” It’s all very PLAIN. But the key to all this… is…believing in Him, accepting the He died on the cross for us… and repenting for our sins, and converting from bad… to good. If we don’t BELIEVE in “all of that,” then we’re going to “mess up badly.” By NOT BELIEVING, we are choosing satan over God….hell over Heaven.

No matter the difficulty; no matter how outlandish the “required deed” will be…. If we BELIEVE…He will be with us… to a satisfactory conclusion. ….Blessings…cjlb…7/17/15.