“…sometimes we need to be SENSITIVE…. to the IN-SENTIVE, and the TOO-SENTITIVE…” 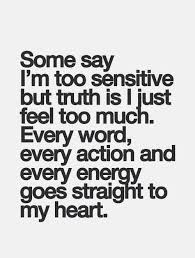 Sensitive, Insensitive, Too Sensitive? It’s NICE to be around people who are SENSITIVE to others, particularly those who are “sincere” and whose purpose is to make others feel good and cared about. This is a wonderful attribute for all concerned.  We can be sensitive at home, at work, socially, at play, and in a spiritual atmosphere especially. Being sensitive to others is a basic criteria to success, no matter the objective. Isaiah 61:1 – The Spirit of the Lord God is upon me, because the Lord has anointed me to bring good news to the poor; he has sent me to bind up the brokenhearted, to proclaim liberty to the captives, and the opening of the prison to those who are bound.  Then, we have those who are IN-SENSITIVE.  These types would be the exact opposite of the sensitive ones, and includes those who are sensitive, but are totally un-sincere. They play the part of a concerned co-worker, or friend, and sometimes, even, a spouse; especially a spouse who is up-to-no-good.  1 Corinthians 3:13-15 – Each one’s work will become manifest, for the Day will disclose it, because it will be revealed by fire, and the fire will test what sort of work each one has done. I f the work that anyone has built on the foundation survives, he will receive a reward.  If anyone’s work is burned up, he will suffer loss, though he himself will be saved, but only as through fire. And, now, we go to the TOO-SENSITIVE.  Here we have a totally different meaning.  This is an individual who is so wrapped up in their-selves, their problems, and they walk-around with thin-skin… just waiting for someone to test their patience.  They don’t always realize it, and sometimes we need to remind them that they’re “just-too-darn-sensitive.” Being “too-sensitive” keeps those around them too up-tight, wondering, when he’s going to lose his cool.  Titus 3:10 – As for a person who stirs up division, after warning him once and then twice, have nothing more to do with him. We should all strive to be sensitive to other’s needs… much like the Golden Rule.  And, sometimes we need to be SENSITIVE…. to the IN-SENTIVE, and the TOO-SENTITIVE.  Romans 8:1 – There is therefore now no condemnation for those who are in Christ Jesus. … For the most part, which one of these characteristics reflect you?   Sensitive, In-sensitive, or Too-Sensitive?  …Blessings… cjlb … 10/19/14

← “…Don’t put the keys to your happiness in someone else’s pocket….”
“…But remember… every time we are tempted by satan; God will intervene for just a moment…” →

2 Responses to “…sometimes we need to be SENSITIVE…. to the IN-SENTIVE, and the TOO-SENTITIVE…”