“…The ONLY-WAY, one can ever achieve his ‘own mark,’ is to be SELF-EMPLOYED…” 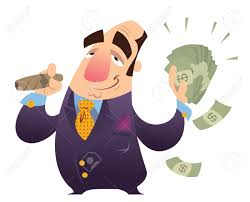 “Stick with me, and you’ll be a millionaire.” Those were the words of a former employer (I was a junior partner), who hired me in the early 70’s. I asked him, “What’s your net worth?” He said that anyone who could name their net-worth, were not very rich… but he admitted to being worth about $15 Million (30 years later…about $50 Million). And, he was right too, because when I joined his firm, I had a net-worth of about $100K.  Seven years later, it was in excess of $2 million. Had I not taken that 25% cut in pay to work for him, I’d probably still be “working for the other guy.”

I learned more from this fellow, than all former employment opportunities combined. Had I stayed with him, though, I would have NEVER achieved “my mark.” By that, I mean to say, I would have not ended up where I wanted to be. Working for “the other guy” will NEVER take you where you want to end up; unless you want to remain indentured for the rest of your working career. It is bad enough being INDENTURED to the Federal, State, and County Governments. Just to put “it” into perspective… the USA is the “highest taxed country” in the world…. that’s another story.

The ONLY-WAY, one can ever achieve his “own mark,” is to be SELF-EMPLOYED. It takes a SPECIAL kind of person to be self-employed. One has to be VERY DISCIPLINED, to reach any kind of measureable success. History tells us that about 25% of “start-up” companies go BUST within the 1st year, and 50% by the 5th year, and 70% by the 1st 10 years.

My first SERIOUS venture into the ranks of self-employed was in 1983. I opened my first “economy motel,” and in the 1st 12 months, I took out $65K in profits. I did something that I said I would NEVER EVER do. I went into a 24/7 business. I didn’t need a key, as the “door was always open for business.” In a period of 14 years, I bought… built… operated… and SOLD enough to “go home and relax,” for the rest of my life. But that’s not what I did…. I jumped right back in the FIRE.   The big difference was, though, I REFUSED to risk my BASE. We never know the future, but one thing I did know…. I wasn’t going to RISK all… again.

In the beginning, I had nothing to lose, as I started with very much of nothing. Over that next 14 years, though, I was up and down like a yoyo… trying to “hold it all together.” With God’s blessings, I did, but also with God’s blessings…. I wasn’t going to RISK it again.  Everything since… was done on “future profits,” not past profits. That, to a degree, is good news…. A bit of a success story.

The bad news is: It’s almost IMPOSSIBLE to do it again. From about 1975 until 1990, one could borrow “plenty of money,” just on their SIGNATURE. Meaning…. Unsecured lines of CREDIT. When the BANKS began to fail in the early 90’s, you couldn’t borrow, hardly, $100 dollars. Now…. If you’re still interested in being “self-employed,” then I’ve some do’s and don’ts for you.

I’ve analyzed some 15 articles on “why small business fail.” All 15 had varying reasons, ranging from the top 5 to the top 11 reasons for failure. I analyzed 25 different reasons; then “narrowed it down,” to the “top 7,” using THEIR DATA. 1. Not enough capital. 2. Out of control growth. 3. Unprofitable business model. 4. Not enough product demand. 5. Incompatible partners. 6. Poor management. 7. Location. The many “other reasons” were, to me, a bit far-fetched, and seemed designed to just fill-out the article.

Let’s start with #1: Not enough “start-up-money” would have to be the “most important” reason for failure.   Its failing to “do your homework,” (failing to plan for unforeseen issues and expenses). I have a fellow, as we speak, who wants to convert a warehouse that I own to a restaurant. I already know he’s not counting on a very expensive “sprinkler system.” So, he’s off to a $75K hole, before he’s even started. #2: Out of control growth? Well, that’s a problem I’d like to have. No one should EVER fail for that reason. It should be the easiest to fix. #3: Unprofitable business model. Who loaned them the money on a bad plan? NO-ONE, knowingly, goes into business with an unprofitable business plan. DUMB! It shouldn’t even be on their list. #4: Product Demand. If you don’t know the demand, then you should NEVER go into business… you’re simply not smart enough. #5: Incompatible business partners. That makes sense. Solution: Don’t’ go into business with people you can’t get along with. My advice is: Don’t have any partners. #6: Poor management: This is legitimate… some people just can’t manage, and it’s a shame they have to find out through failing. Someone should have told them that were not management capable. If you can’t do it, then hire someone who can. Better yet… don’t go into business. #7: Location: This was the least of their reasons of failure… but it should be on the top.

I can summarize all of this Wall-Street-Analysis, into just FIVE important ingredients for SUCCESS. My #1 is: Plan-of-ACTION. Come up with your plan, your product, and STUDY it 10-times-side-ways. KNOW what you’re doing. This is not a game for AMATURES; unless you have more money than brains. My #2 is: Manage it yourself. If you’re not capable… then don’t even try.   Just work for the other guy. My #3 is: Money. If you don’t have ENOUGH of your OWN MONEY…. Then, don’t even bother. Save your money, or borrow it from people who KNOWS that you’re never going to repay them, and will love you anyway. My #4 is: LOCATION, LOCATION, and LOCATION.   In each business that I’ve every started; I found a LOCATION that I wanted, and then came up with the POA (Plan-of-ACTION), and the Capital. My #5 is: Hard Work and COMMITMENT. Be prepared to work long hours, hard, and for a long time. If it was easy, everybody would be doing it. If you are not “fully committed, and if you’re not willing to put in the time…. then don’t bother to try.

There is also an OVERLAY to MY-FIVE ingredients…. PRAYER! Pray to God for HELP, discernment, understanding, guidance, confidence, and good health, and an “understanding spouse. And, if you’re in all of this…. Just for the MONEY… then that’s not a good enough reason. There has to be an “underlying” reason. What is it? Are you trying to PROVE that you’re capable? That was surely one of mine. No one thought me capable of succeeding…. And I had to PROVE them wrong. It would HELP if you’re doing it to further the cause of mankind by being a “good employer.” Give people “something for their money.” Give a good product at a FAIR price. Treat your CUSTOMER as you want to be treated. And, don’t EVER ask someone to do something that you’re not first “willing to do” yourself.

Mark 5:36 tells us – Overhearing what they said, Jesus told them, “Don’t be afraid; just believe.” There will be times when you are the only person who believes in your business dream, and abilities. Don’t be afraid.  Ecclesiastes 11:4 – He who observes the wind [and waits for all conditions to be favorable] will not sow, and he who regards the clouds will not reap. Be willing to make quick decisions. No one is going to do it for you.

Note:  This article is “slanted” to those who have “thoughts” of being self-employed.  It is recognized that most of us are well contented, happy, joyful, and fulfilled; without the substantial risks of self-employment.