“…What if… the “marriage license process” were to take six (or even 12) months, vs three days; then likely we would have less divorces…” 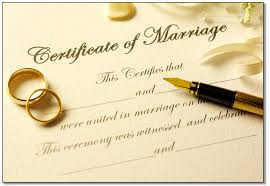 INTERCESSOR: A term, often used, in spiritual settings; as to intercede, or petition the Father for the needs of others; or our own. It’s also used in business and government settings, as in negotiating, petitioning, or mediating disputes. For one, our Secretary of State is deep into Intercessory activities; in fact, that’s his job.

If we can’t “force it on them,” then we employ negotiating, petitioning, and/or mediating. We’re required, by law, to mediate lawsuits at the lowest level of the court system. We are even told in the Bible…in the Gospel according to – Matthew 5:24-26- leave your offering there before the altar and go; first be reconciled to your brother, and then come and present your offering. “Make friends quickly with your opponent at law while you are with him on the way, so that your opponent may not hand you over to the judge, and the judge to the officer, and you be thrown into prison. “Truly I say to you, you will not come out of there until you have paid up the last cent.

Actually, there is an “art,” in developing the techniques of utilizing “focused time;” that is to say… “To influence the course of an issue,” by favoring one side over the other. We can, and should, learn to do it, ever so better, even, in our private lives. We are in constant negotiation with our spouse, children, our co-workers, even friends…and certainly “foes.”

On a more personal level… what if… the “marriage license process” were to take six (or even 12) months, vs three days; then likely we would have less divorces; which transcends into “better negotiating,” hence…the intercessory process… praying for God’s guidance… in a “God-filled” marriage.

In today’s society, and far too often… we make every attempt to “solve all issues” on our own, using “only” our own resources. Leaving God out of the process, at any level… is at the “heart of the issue,” as to far “the process FAILED.”

Hebrews 6:4-6 – For it is impossible, in the case of those who have once been enlightened, who have tasted the heavenly gift, and have shared in the Holy Spirit, and have tasted the goodness of the word of God and the powers of the age to come, and then have fallen away, to restore them again to repentance, since they are crucifying once again the Son of God to their own harm and holding him up to contemp.