“…Was anyone THINKING…they didn’t reveal it? No-one said a word…” 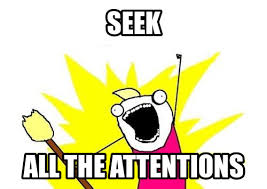 QUITE-TIME:   Some years ago, I had a consulting job paying $13K per month. One day, to “make a POINT,” I called a meeting of their 15-member Management Staff… into a windowless conference room. About half-way into the meeting agenda, I turned the lights off….and waited…. about 10 minutes went by. Remember: It was “pitch-dark” in there.
Was anyone THINKING…they didn’t reveal it?  No-one said a word.   You would have thought…that someone would say… “Hey….turn the lights on.”  I was trying to “get them to THINK,” ….but NO-ONE seemed to pick-up on the idea…. which, I guess…. proved my POINT…which was:  How long would 15 adults sit in the dark…. and not know why they were…. or not “challenge” the call?

Several weeks later, during a Board-of-Directors meeting, I tried the same “stunt,” thinking…boy, what an opportunity to “play with their heads.”   Just 30 seconds into it…some old fellow said…”turn the lights on.” And…. he MEANT it.  Was he THINKING… or scared of the dark?

Thirty days later…the Board, to their surprise, found out they were paying me $13K per month….too much… “To be playing with their heads,” …. and sent me for a long walk off a short pier.   It cost me a lot of $$ to make my point….THINK!

Moral of the STORY…. Older people, sometimes THINK quicker than younger people. Quite-time is a good time for THINKING… and after that “stunt,” I had plenty of QUITE-TIME.   Maybe I should have read…. Proverbs 14:15 – The naive believes everything, But the sensible man considers his steps.  Since then… I’ve tried to be more SENSIBLE… proving to me… that I wasn’t so smart… after all.  And, that the “learning process never stops.”