“…What would you do if you were God…? 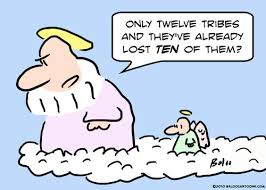 A father wanted to read a magazine, but his little girl kept bothering him…wanting to know what the United States looked like. Finally, he tore a page out of his new magazine on which was printed a map of the USA. He then tore the map into small pieces, gave it to her, saying, “Go into the other room and see if you can put this back together.” And, oh yeah…. “Take your time.” To the Dad’s utter surprise…. In a few minutes, she returned and handed him the map, all of which was correctly fitted and taped together, showing the Map of the USA, all as it should be…. In its Glory. .The Father was, obviously very surprised, and asked how she had manage to finish so quickly. “Oh, that was simple Dad,” the girl replied, “on the other side of the paper is a picture of Jesus. When I got all of Jesus put back where He belonged, then our Country just came together.”…Author unknown.

Oh… if it was just that simple! In a little girl’s mind… it was simple. But, in reality, it will take “decades and decades” to put the good ole’USA back together again. It’s more likely that we’ll see “the second coming of Jesus,” before the USA is put back together again.

But, you know what? ….It doesn’t have to be that way. In Matthew 4:19-20, we are told…”Now as Jesus was walking by the Sea of Galilee, He saw two brothers, Simon who was called Peter, and Andrew his brother, casting a net into the sea; for they were fishermen. And He said to them, “Follow Me, and I will make you fishers of men.” Immediately they left their nets and followed Him. But, in our case….He asks, but we DENY Him. We REFUSE to follow Him.

What would you do if you were God? He likely “gets tired of asking us to follow Him…. To LOVE Him; to love our NEIGHBOR. He even says to us…”Ask and you shall receive.” But we don’t BELIEVE Him. In John 5:24 – “Truly, truly, I say to you, he who hears My word, and believes Him who sent Me, has eternal life, and does not come into judgment, but has passed out of death into life.”

God tells us clearly what He will do, in Matthew 7:22-23- “Many will say to Me on that day, ‘Lord, Lord, did we not prophesy in Your name, and in Your name cast out demons, and in Your name perform many miracles?’ “And then I will declare to them, ‘I never knew you; DEPART FROM ME, YOU WHO PRACTICE LAWLESSNESS.’

← “…If you’re depending on someone else to ‘make you happy,’ then forget it…”
“…My point is that we all are guilty of the “exaggeration syndrome,” most all of which, is HARMLESS jibber-jabber…” →

2 Responses to “…What would you do if you were God…?