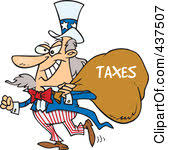 WHERE IS OUR MONEY?  Ever think about this?  Where did the money go that the US Government collected from us, and our employer, over the years, when the tax payer dies before ever having an opportunity to collect a dime?  Or course….it goes into the “general pot,” but “that pot” turns out to be the government’s pot…they stole it.  They’re using “our pot of money” to pay themselves disproportionate retirements, vacations, private assigned aircraft, vacations…all at our expense, with our money…money they MIS-APPROPRIATED.  Remember, not only did you and I contribute to Social Security System, but our employer did as well; together, totaling 15% of our income before taxes.  If one averaged only $30K over the course of their work life, then the US Government would have collected close to $220,500 from each of us.  The Government has not paid in one single penny towards the Social Security Trust (???) Account.  We are talking about the money you and your employer put in a Government bank to insure that you and I would have a retirement check from the money we put in.  Now… the Government is calling the money that we put in…. an entitlement when we reach the age where “our Social Security” is redistributed back to us as a form of retirement supplement.  If you calculate the future invested value of $4,500 per year (yours & your employer’s contribution) at a simple 5% interest rate, which is less than what the Government pays on the money that it borrows.  After 49 years of working you’d have $892,920.  If you took out only 3% per year, you’d receive $26,764 per year, lasting some 30 years (until you’re 95. if you retire at age 65) and that’s with no interest paid on the $892K over the 30 pay-out period. If you bought an annuity, independent of the government, and it paid 4% per year, you’d have a lifetime income of $35,717 per year over the same 30 year period. THE FOLKS IN WASHINGTON HAVE PULLED OFF A BIGGER PONZI SCHEME THAN BERNIE MADOFF EVER THOUGT OF DOING.   This is not an entitlement from the government, rather,  it’s a return of our own money.  Just because they borrowed the money and used it for other government spending purposes, doesn’t make our benefits some kind of charity or handout!  Remember Congressional benefits?  Consisting of free healthcare, outrageous retirement packages, 67 paid holidays, three weeks paid vacation, unlimited paid sick days, free postage, numerous trips abroad, and numerous other hidden benefits.  Now that’s welfare, and they have the nerve to call our social security retirement payments… entitlements?  They call Social Security and Medicare an entitlement even though most of us have been paying for it all our working lives, and now, when it’s time for us to collect our own money back; the government is running out of (our) money.  How could the government borrow from it in the first place?  It is said that they illegally transferred our SSI money into the General Fund, with promises to repay it….but NEVER have.  It was supposed to be in a locked box, not part of the general fund.  What’s next….oh yeah…our 401K money.  What the heck is going on?  REMEMBER:  We citizens have a say in this…VOTE the RASCALS OUT!      Blessings…cjlb… 2/04/14  (I don’t know who wrote the original article, but I’ve adapted it for my own use).